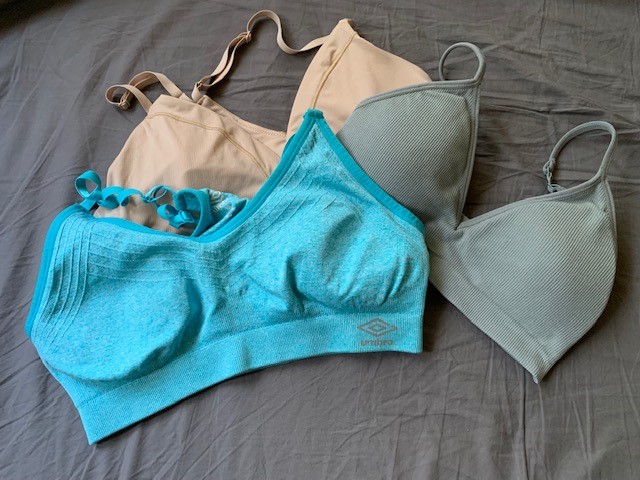 Of all the horrors of aging, getting trapped in my sports bra is right up there with gray hair, wrinkly skin, and, and, and I can’t remember the third thing. Oh, yes, losing my memory. Ok, what was I saying?

I can no longer wear the sports bras that you have to pull over your head as the other day, I almost had to cut off my sports bra. I was stuck with it twisted part way up, both breasts exposed and molested by the tangled bra that now seemed to have fused into a band of steel. This strange sort of trapping happened because I recently hurt my shoulder. I am not sure how I hurt it, but at this stage of the game, it could have been from exercise or just as likely it was from brushing my hair or putting away dishes.

I could not lift my arms high enough and did not have enough strength to force the sports bra over my head. I thought to myself, I need someone to pull this straight-jacket piece of clothing off of me! Patrick was on a work Zoom call, so that option was definitely off the table. I thought of my children who were home but then realized that my children do not need to see the horror of me trapped in an item of clothing. At least not yet. Let’s save that horror for at least 35 years down the road.

Rather than suffer the embarrassment of asking someone to pull it off me, I thought about my nail scissors. I pulled them out of the bathroom drawer. I looked between the sports bra and the scissors. The sports bra was relatively new, so in my true Midwestern form of thriftiness, I just could not do it. And I was not even sure nail scissors could sever the garment.

As I stared in the mirror at the twisted, mangled sports bra pressing into my flesh, I thought, hey, I got time on my hands while I figure this out – when were sports bras invented?  I am nothing if not efficient with my time.

An Internet search revealed that this article of clothing was invented in 1977 by a woman named Lisa Lindahl. She was an avid runner and could not find anything that kept her “girls” from bouncing around. She realized that she needed something like a jockstrap that men used and the first “JogBra” was invented.

During the 70s, athletics became an important equal rights issue as women fought for equal access to high school sports. On June 23, 1972, Title 9 was passed which “prohibited federally funded educational institutions from discriminating against students or employees based on sex.”

Before Title 9, few athletic opportunities were available to women. After its passage, schools were required to provide equal access to sports. Not all sports were given equal amounts of money, but this amendment provided women with more and more athletic opportunities. Since that time,  “women’s participation in sports has grown exponentially.”

As a child of the 70s, I remember that running was an important part of society and of our family. My dad was the Lakeville High School Cross-Country coach, and he had been an avid runner since his college years. He liked to explain that when he first started running, people thought you had to pack a lunch to run more than 2 miles.

My sister, Julie, joined the Cross-Country team as a 9th grader in 1974. She was the only girl on the team but soon found other interested females. My sister was fast and beat many of the boys, who seemed to pull a muscle or get a side stitch the minute a “girl” passed them.

All this increased interest and opportunities drove the sports bra industry and the women’s sports apparel industry into the 7 billion dollar business that it is today.

But let’s return to my bathroom and the challenge at hand. I looked at my pathetic self in the mirror, trapped by my wardrobe. I realized that the best choice was to look deep within my soul and pull that little f***er off. I knew my shoulder would hurt, but what doesn’t hurt now? I took a deep breath, twisted my arms across my chest, and wrenched that demon bra up as quickly as I could. I groaned and muttered just like I was giving birth, (in fact, it was EXACTLY like giving birth, just in the opposite direction!). Finally, that bra separated from my body, and I flung it on the floor and stomped on it just a bit.

I immediately texted my daughter Brigit, who often accepts my hand-me-down athletic gear, and typed: Do you need a gently used black sports bra?

She responded with an immediate, Sure! and I hung that evil garment on her doorknob, but not before I gave it one more little stomp on the ground, just to show it who was boss.

To find out more about the invention of the JogBra:

To find out more about Title 9: